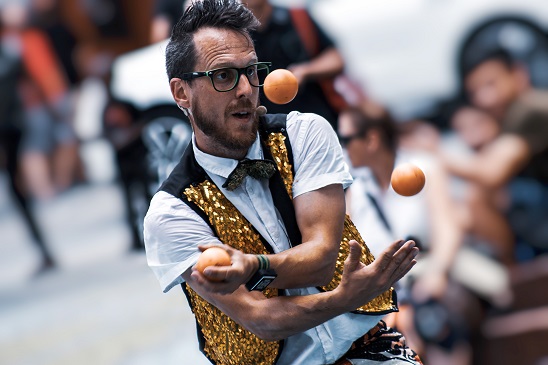 The last few blog posts have been a little more on the technical side, so to keep it balanced I figured I’d discuss my odyssey of juggling individual development, side-hustles, a full-time job, and raising a family. I’ll save an in-depth discussion of Kotlin Multi-Platform Project for next time.

The “Hustle Lifestyle”, popularized in the early 21st century, has become something of a running joke. The Youtube channel KRAZAM even did a great two minute video lampooning the concept of the hustle in the tech world. In the video the protagonist wakes up at 6 am, works out, leaves for work at 8:30 am, and doesn’t get back home until 8:30 pm. He has no meaningful human interactions and generates nothing of lasting value. He’s incredibly active, without being at all productive.

In the Army we had a different metaphor, that of juggling. Officers, both commissioned and non-commissioned, were expected to juggle a lot of different competing tasks every day. Each task was a ball that had to be kept aloft. The crux of the metaphor was recognizing and categorizing the material that each ball was composed of. Some “balls” were made of rubber. You could drop them and they would usually bounce back up so that you could return to juggling them after a brief interlude. Other “balls” were made of more fragile stuff, like glass, and woe unto you if you dropped them. The trick to being a successful officer was determining which balls could be dropped and which ones couldn’t.

It’s a metaphor that’s served me well even after leaving the service. The obligations of my full time job and family definitely have the highest concentration of “glass ball” tasks. I’m sweating bullets if I think I might miss a deadline on a work project or may be late to pick up my kids from the bus stop. My side hustles and individual development tasks are much more forgiving in comparison. When a part-time client comes along, I can drop my individual development routines (blogging, DIY, and HackerRank) to make room. And when push comes to shove, those part-time clients will always lose out to my full-time job requirements.

That being said, I could never do all this juggling without the support of my family. Both my parents and my wife’s parents are are less than an hour away and have been invaluable as ad-hoc jugglers to whom I can quickly toss a ball (or kid) as needed. Not to mention my wife, who does her own juggling, and who I can count on to selflessly pitch in when things get overwhelming.

To summarize, rather than trying to “out-hustle” life on your own (a recurring theme in KRAZAM’s spoof video), you need to triage your responsibilities and generate a support network that you can count on in a pinch. I wouldn’t have made it as far as I have without such assistance. My hope is that by re-framing your particular circumstances you’ll find the strength to carry on in these precarious times as well. Until next month, keep juggling.

Photo by Yi Liu on Unsplash