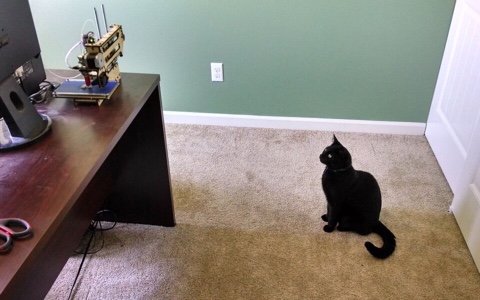 I received my Bachelor of Science in Computer Science at the United States Military Academy in 2011. I graduated at the top of my class in my major, with honors, and my capstone project, the Joint Academy Cooperative Unmanned Systems Iniative won ‘Best Solution to a Military Problem.’ While in the Army I served in Afghanistan as a Scout Platoon Leader and was eventually promoted to Captain.

Since leaving the Army in 2016 I’ve worked as a mobile applications developer. I’ve been primarily focused on native development in Swift, Java, and Kotlin, although I’ve done some side projects in Ionic and Xamarin as well. For full stack solutions I’ve worked primarily in .NET Core, although I have to say that I prefer Spring Boot and Kotlin, which I’ve used for side-projects.

The picture above is of our cat, Steve, staring at my Printrbot 3d printer.